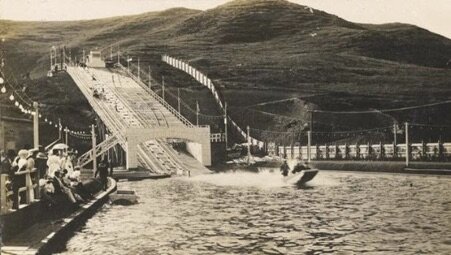 New Zealand’s first commercial waterslide ride was a long wooden shute that rocketed riders down its 67-metre slope in flat-bottom boats, reaching speeds of up to 50 km/hr before aquaplaning across a man-made lake to a gentle stop. The location was Wonderland Park, Miramar, Wellington, and the year was 1907.

The fibreglass tubes most Kiwis now affectionately refer to as ‘hydroslides’ arrived in New Zealand in the early 1980’s, when Christchurch-based entrepreneurs, Ian & Daphne Gamble, opened New Zealand’s first indoor hydroslides attraction at the QEII Park Pool, Christchurch. The year was 1981 and this was a 2-slide attraction, with riders travelling head-first on foam rubber mats, to exit into a small pool. These hydroslides were extraordinarily popular, breathing new life into a QEII pool complex that had remained largely unchanged, since being purpose-built for the 1974 Commonwealth Games. An iconic Christchurch attraction that would become loved by generations had arrived.

Legend has it that it was Daphne who first coined the term ‘hydroslide’ during a family dinner, and the name has stuck ever since. To this day, New Zealand is the only country in the world where waterslides are commonly referred to as ‘hydroslides’. 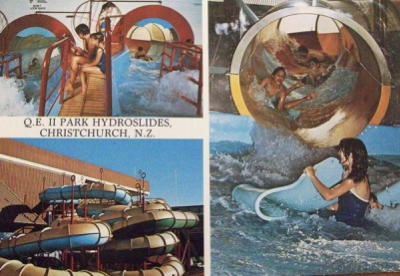 Around the same time that Ian & Daphne were building their hydroslides at QEII, fibreglass waterslides were beginning to gain traction globally and a young Canadian KPMG accountant-turned-entrepreneur, Geoff Chutter, was building his first waterpark in Penticton, British Colombia. Penticton is a town of around 35,000 people in the Okanagan Valley, roughly a 4 ½ hour drive east from Vancouver.

There was little in the way of industry knowledge and support available in those early days; Geoff had to figure out waterslides for himself and in the process helped pioneer today’s global industry. The market really took notice of the Penticton waterpark, and Geoff received several approaches from people, to build waterparks for them.
While Ian & Daphne went on to build several more hydroslide attractions attached to aquatic centres around New Zealand, Geoff had discovered his passion was for designing, engineering and manufacturing waterslides, rather than owning a waterpark. He sold his Penticton waterpark in 1983 to concentrate on manufacturing waterslides for a growing global industry. During the 1980s more manufacturers entered the market with some, like WhiteWater West Industries, evolving into true global players.
Click here for WhiteWater’s global history and heritage 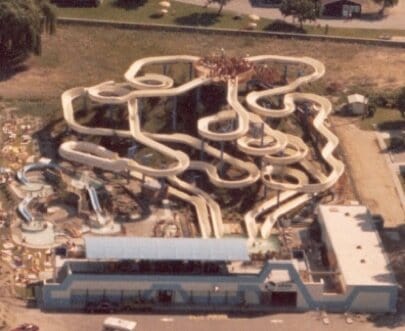 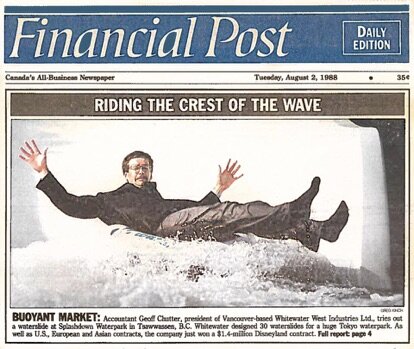 The New Zealand market has two key limiting factors; climate and population. Most of our hydroslides are small-scale, 1 or 2 slide, indoor additions to municipal aquatic centres.

During the 1980s and 1990s, Christchurch’s Cresta Composites and Timaru-based Aeromarine Industries, dominated the local New Zealand market in hydroslide design and manufacture. Both were well-known and respected composite manufacturers, but hydroslides were not their core business. The New Zealand market simply wasn’t big enough to support full-time specialist hydroslide manufacturing. From 1981 through to the early 2000s these two firms designed and installed somewhere around 30 hydroslide attractions throughout New Zealand, predominantly indoor attractions at aquatic centres. This small number of projects split amongst 2 competitors, with the number of installations varying from year to year, resulted in a hydroslide design and building environment that focused upon the tried and true rather than the innovative, world-leading design which has been the hallmark of WhiteWater West Industries. In spite of a promising and early start, New Zealand designers and manufacturers were quickly being left behind by their overseas counterparts.
Cresta Hydroslides 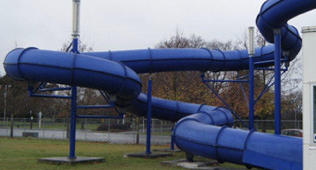 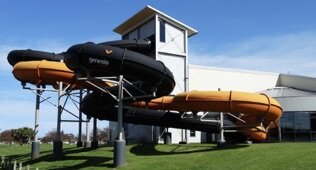 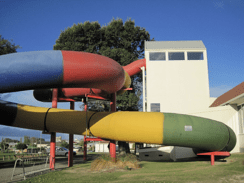 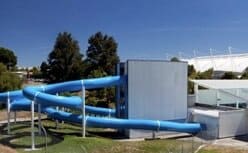 Most of the 30, or so, hydroslide installations that Cresta and Aeromarine did complete between 1981 and the early 2000s were basic-level, enclosed body slide aquatubes and a drive around New Zealand will confirm that there aren’t many points of differentiation amongst them; nearly all look much the same. Cresta’s slides are easy to identify, having standard flanged joints between sections, while Aeromarine’s were marketed as ‘seamless’, having longer sections that were instead joined together by a fibreglass wrap. 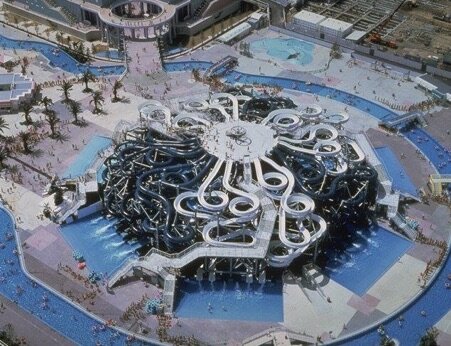 Rokko Island, Kobe, Japan
Both brands typically started from low platforms, delivering a low-level thrill experience, compared to what was being developed and installed overseas. Globally, platforms had become higher, which immediately opened up the potential to make ride-experiences more thrilling, while the exponentially larger and more competitive overseas market made it not only feasible, but an absolute necessity, to invest heavily in product development.

A good example to demonstrate this difference in scale and capabilities is Rokko Island, a WhiteWater West project completed in Kobe, Japan, in the early 1990s, with 50 slides running off a single, circular tower. That’s about the same number of waterslides in a single project, from a single tower, as the combined total of individual hydroslides installed by the 2 New Zealand manufacturers between 1981 and the early 2000s. Unfortunately, the Rokko Island waterpark was demolished after the 1995 Kobe earthquake. It was a remarkable achievement in precision design and manufacturing.
During the 1990s there were a few minor projects involving international manufacturers in New Zealand. For example, WhiteWater West installed a wave machine at Moana Pool in Dunedin and a small water toy at Pioneer Pool in Christchurch, but things were about to change! 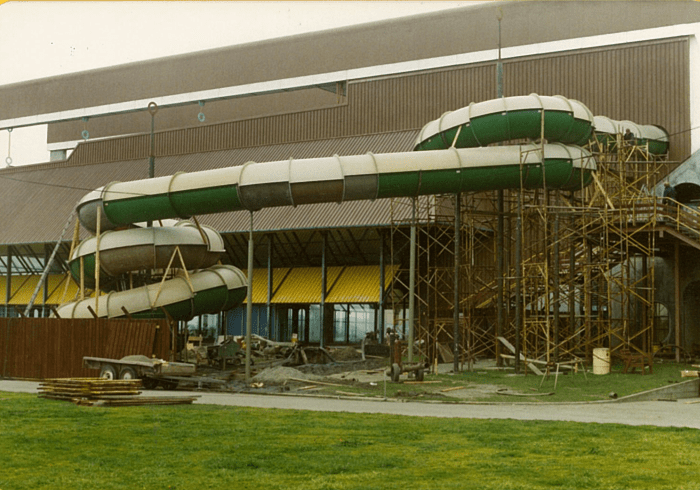 Our story: A leaky roof brings WhiteWater to New Zealand

The catalyst, that would eventually lift our standard of hydroslides and result in the first of WhiteWater West’s significant installations in New Zealand, was the Christchurch City Council’s decision to redevelop the ageing aquatic leisure facilities at QEII Park. Specifically, it was the extreme embarrassment caused by the combination of a heavy downpour and a leaking roof, that drenched guests and dignitaries, seated at tables alongside the 50m pool, during the formal finals night dinner function for the IPC Swimming World Championships, held at the QEII Park pool complex in October, 1998. QEII Park was clearly aging, still largely unchanged from the 1974 Commonwealth Games, and its roof leaked badly. 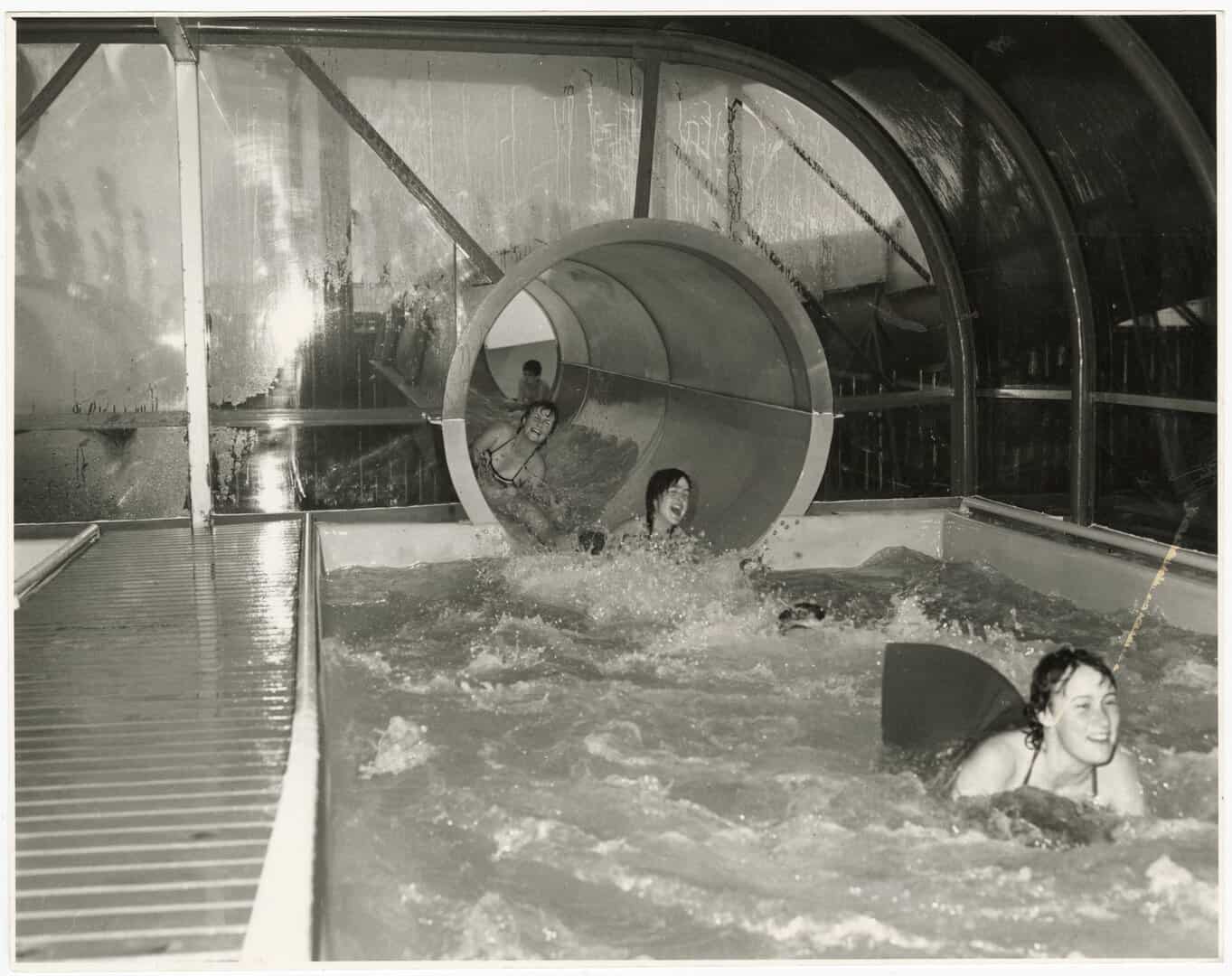 The original 2 waterslides that Ian and Daphne had built were, by that stage, back under council ownership, nearly 20 years old and in need of repair. An internal report from 2003 noted that Council had been quoted a refurbishment cost of $420,000 and had decided instead to demolish them. Unfortunately, the Atlantis project had no allowance for hydroslides repair or replacement.

Atlantis therefore opened without hydroslides, but such was the popularity of the original iconic hydroslides, that their absence was keenly felt and much talked about.

Against that backdrop, the Christchurch City Council decided to seek commercial proposals for new hydroslides, to be privately owned and operated as a seamless addition to QEII Park, just as Ian’s and Daphne’s had been back in 1981. 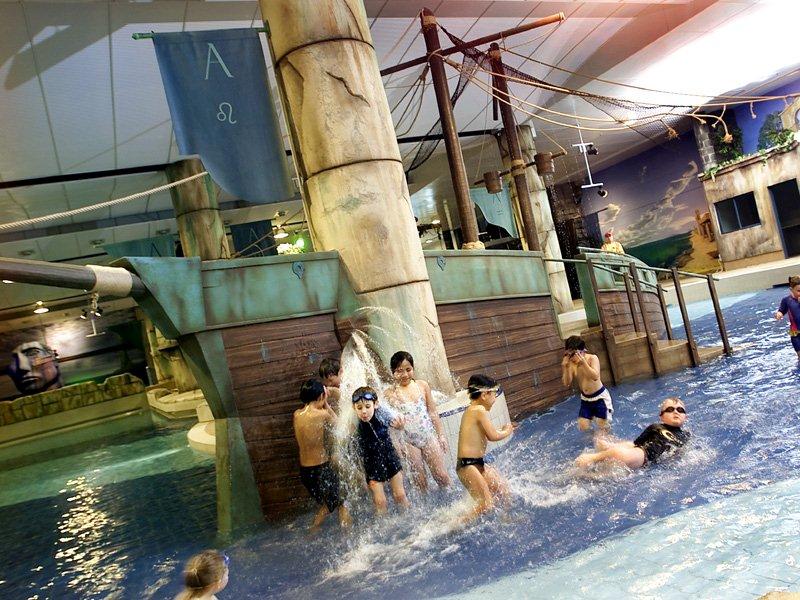 Minoan ship play feature of Atlantis, QEII
Despite stiff competition, and without any prior experience of hydroslides construction or owning and operating a hydroslides business, QEII Hydroslides Limited’s proposal for a 5-slide, 500m WhiteWater West manufactured attraction, was accepted in by Council in 2004. It had the “Wow!” factor and ride capacity to add real value to the ‘Atlantis’ experience.

QEII Hydroslides had been formed in 2003, by Paul Jackman and Grant Brenton, specifically to bid for these new hydroslides. New Zealand’s largest indoor hydroslides attraction opened to the public in July 2005. Just like Ian and Daphne’s 1981 hydroslides, these new hydroslides were extraordinarily popular, remaining open until the Christchurch earthquake, in February, 2011, saw the end of the original QEII Park pool complex. 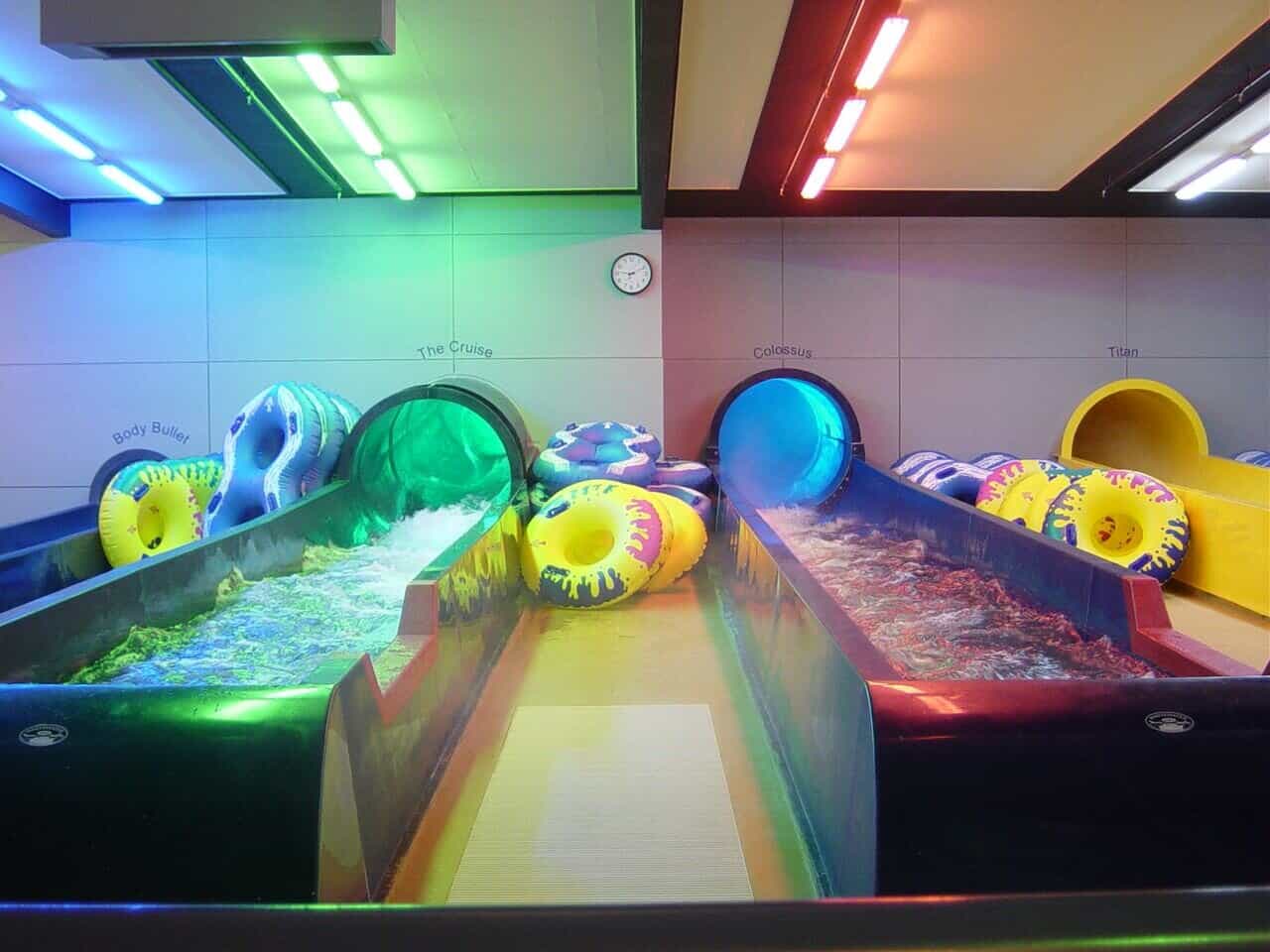 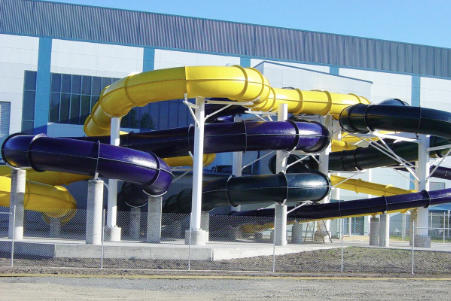 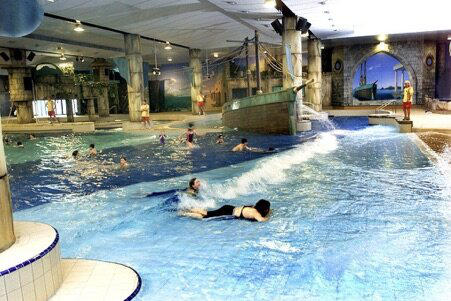 WHATEVER YOU CAN DREAM, WHITEWATER NEW ZEALAND CAN HELP YOU BUILD IT.

We are uniquely qualified, as both long-term owner operators and installers, to advise on the best hydroslide for your venue, along with operational fundamentals, including health and safety and maintenance. Best of all, we connect your project with WhiteWater West Industries; the world’s largest and most experienced hydroslide designer and manufacturer and a true pioneer of the global hydroslide industry. 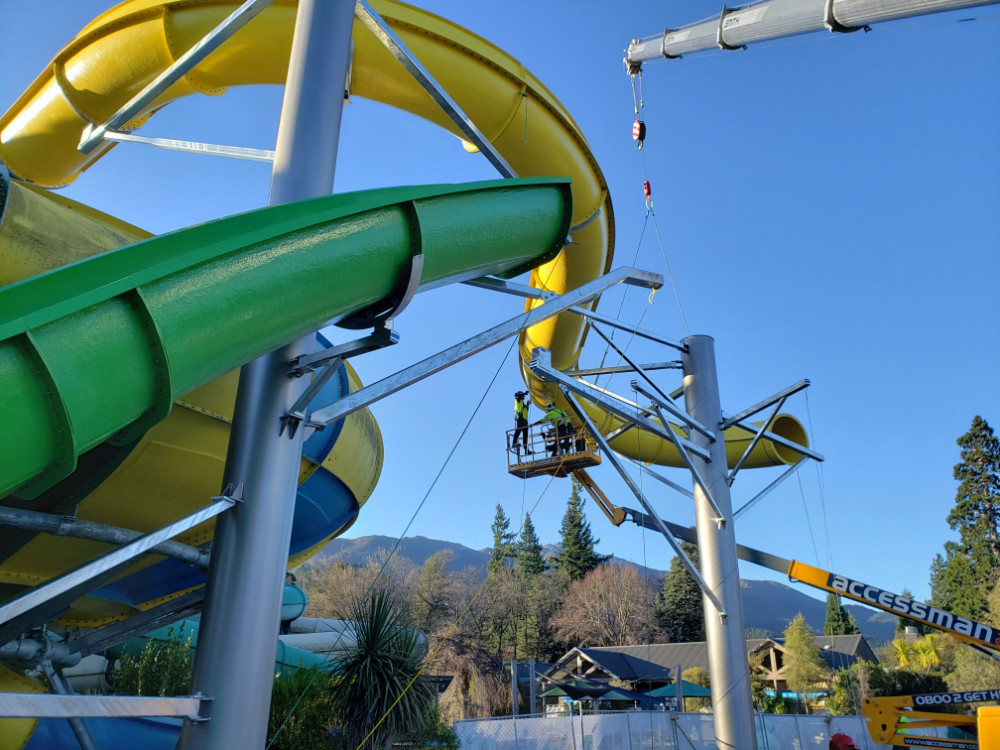 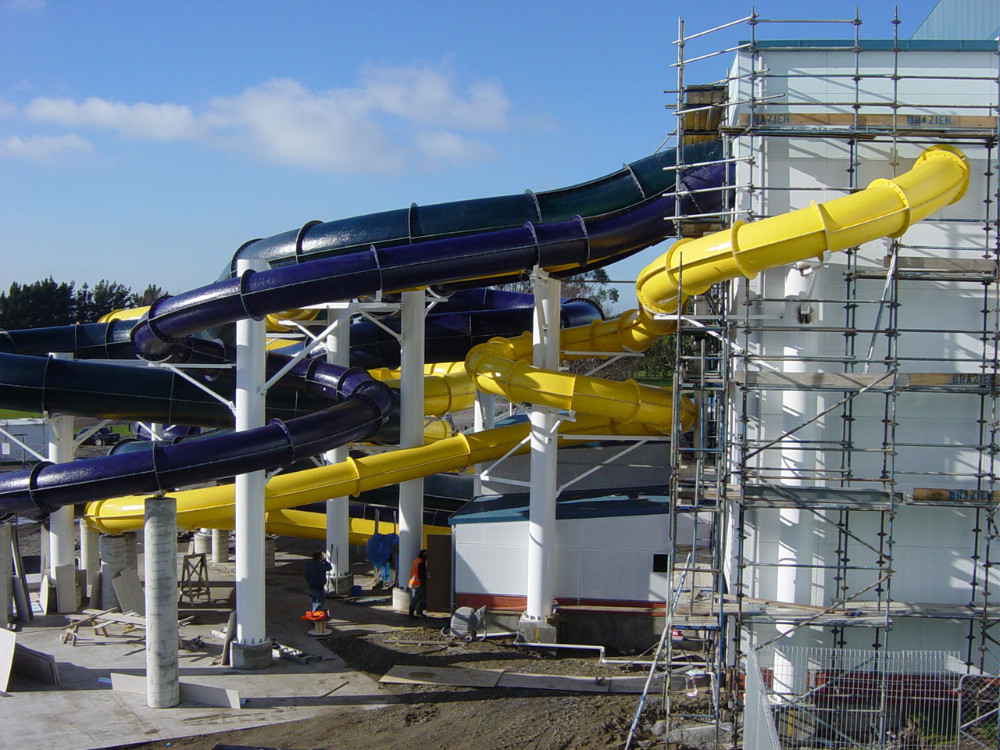